skip to main | skip to sidebar

In honor of spring feeling like it sprung and restaurant week, I surprised my beau for a lunch at Mooo.... He had raved about the delicious steak and I love going to steak houses but rarely indulge unless the price is right. A three course meal at Mooo.... was $20.12 each which felt like a steal for the amount of delicious and beautiful food we ate. It is rare (pun intended) to have a lunch date, so we decided to live on the wild side, or at least my dining partner did, and I tried everything on the table!

We were slightly early for our noon reservation and the hostess sat us right away at a very pretty table with horsehair pillows on the booth side of the table. I found the decor to be ornate. The restaurant's menu was so simple and classic, I felt like a queen on a throne with pillows.

To start off we had the most delicious rolls that were sweet and salty with simple butter (not pictured). I ordered a steakhouse salad. It was awesome with lettuce, tomatoes, cucumbers, olives, feta and that dressing which immediately makes you think of a steakhouse. It's oil vinegar and spices, simple yet perfect. If I was not indulging in three full courses, I would have been happy eating this salad with a piece of protein on top--it was so tasty. 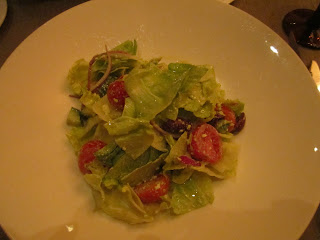 My dining partner won the adventurous game. If you guessed that he ordered steak tartare, you are correct. Neither or us had ever eaten steak tartare before, but his logic was, where else would I try it? Since Mooo.... was such a good restaurant, he decided to live live on the raw side. The steak tartare was delicious, it came with flat breads and the raw meat was mixed with onions, capers and possibly tomato. The best way to describe it's consistency was a meaty fresh salsa. It was really flavorful and tossed with some oil, salt and pepper. 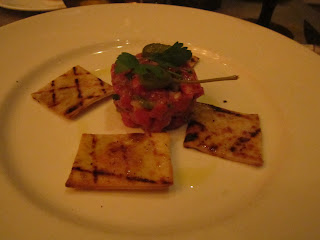 We realized after the fact that we were ironic by ordering our sirloin steak medium after eating raw meat. The meat was cooked to perfection. The grill lines were perfect and the outside was caramelized while the inside was perfectly pink. The steak was thicker in the middle, so it was slightly rarer where the meat was thicker. In hindsight, I wish I had ordered the meat medium rare because the quality was so high that it would have been that much more delicious. The steak was served on top of a bed of watercress and fingerling potatoes. I am not a stinky cheese fan, so I held the blue cheese, but my dining partner had the meal as it was. The potatoes were simple with some salt and pepper on them and the watercress was simple. I'll be honest, I focused on making sure I ate my steak and potatoes, so by the time I got to the watercress, I was ready for the delicious chocolate dessert. 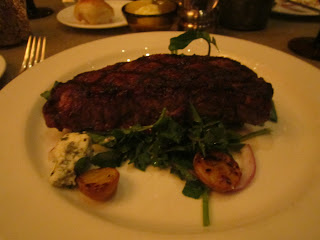 The dessert was outstanding! I love chocolate dessert anytime, especially after a steak. We had two of the same desserts. It was a brownie with vanilla ice cream and a homemade marshmallow on top. There was caramel sauce on the bottom and it was homemade and perfect. It tasted like toffee that had not hardened yet. The portion was the right size. I wanted more because it was so delicious but I would have had no where to put it because I was so full. The brownie was rich, like a piece of flowerless chocolate cake. It was smooth and not too sweet. The ice cream was homemade as was the marshmallow. I mentioned it before but I think a homemade marshmallow is a great alternative to whipped cream on a chocolate dessert. We both loved this dessert, it was a stack of happiness. 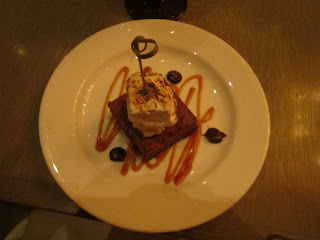 Overall, Mooo.... was outstanding. I walked out into the sunshine feeling satisfied and energized whatever else the day had in store for me. I hope to throw a party in their downstairs cellar room. I'm looking forward to coming back here sometime and trying their American Wagyu  Dumplings and a porterhouse (my favorite cut of steak). Until then, I will think about the perfect meal I had and how daring we were to try steak tartare.
Posted by Unknown at 10:43 PM